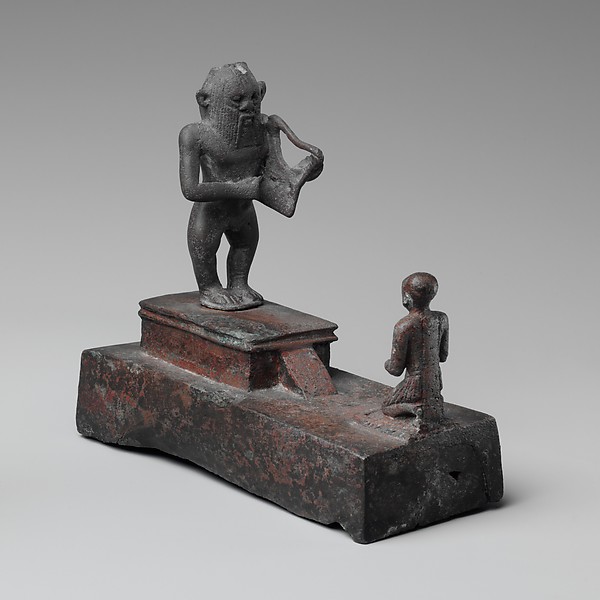 The pantheon of ancient Egyptian deities was central to every day mortal life. Each god and goddess had a function. Among other positions, there were deities related to death, birth, sunrise, sunset, crops, water, and good fortune. Because of their religious practices, the Egyptians worshipped a vast array of deities and offered special praise or sacrifice to specific deities when faced with certain situations. In many cases, images of these deities were commonly seen as statuary or votive figures within the home or worn as amulets. Bes with Worshipper, located at the Metropolitan Museum of Art in New York, was likely an object that was placed inside of a home for personal worship purposes or within one of the birth houses found in ancient Egypt. This piece was created circa 664-380 BCE, which corresponds to the 26-29th Dynasties of ancient Egypt. This statue was created from a bronze or copper alloy and is approximately six inches tall, two and a half inches wide, and six inches long (metmuseum.org).

This is a depiction of the god, Bes. Though not one of the main deities in Egyptian theology, Bes is most commonly worshipped during the time from a person’s marriage, through the conception and birth of a child. In the book, The Spirit Of Ancient Egypt, Bes is described by Ana Ruiz as the “god of childbirth, protector of children and guard against nightmares. Bes is also a god of music, dance, merriment, and of the nuptial bed, and was believed to bring good luck to newly married couples” (Ruiz, 110). Ruiz goes on to explain that it was very common for people to wear an amulet with Bes’s image, as it was believed that it would bring good fortune. This was not Bes’s only function within society; Ruiz mentions that Bes also was a deity presiding over inebriation.

In this piece, Bes is placed on a pedestal and towers above the worshipper. The image of the deity is slightly enlarged, yet it is still clear that the figure is meant to be that of a dwarf-like figure. The deity is holding a harp or a lyre in his left hand, which has been assumed to be a symbol of the fact that he can calm angry spirits (metmuseum.org). The harp could also be a representation of the fact that Bes is a god of music as well, though the fact that there is a worshipper at his feet in such a compromising and submissive position almost implies that the mortal figure is asking for assistance with malevolent spirits or praying for his blessing over his nuptial circumstances. Ana Ruiz explains that “this deity did not have a cult center or temple dedicated in his honor, but was very popular and often worshipped privately at home” (111).

Bes, in this depiction, is only mildly portrayed in his unusual form. Usually Bes is depicted as “a dwarf wearing a beard, a feathered headdress and the mask of a lion-type beast” (Ruiz, 110-11). In some instances he is also depicted having a tail. This depiction is relatively simple and is only identifiable due to his dwarf-like physique. One consistent aspect of the god’s depiction is that he is always seen as fully frontal, rather than the typical profile view in painting and relief sculptures. There is very little scholarship on the subject as to why the depiction is so different than other deities, but Encyclopedia Britannica mentions that it was possible that it is this way “since full-faced figures were marginal to the normal, ordered world”. Bes, being a deity largely involved with the spirit world, and particularly malevolent sprits, was far from being part of the normal and ordered world. Thus, the depiction of him fully frontal seems appropriate. His demon/animal-human hybrid of characteristics is also seemingly appropriate. While it was not uncommon for there to be animalistic associations with gods and goddesses in ancient Egyptian theology, being depicted as dwarf-like and “imperfect” is highly unusual. Lacking scholarship on this topic as well, one could assume that the mutated figure is a result with his dealings with the malevolent spirits and possible influence or corruption by the spirits at some point in Bes’s encounters.