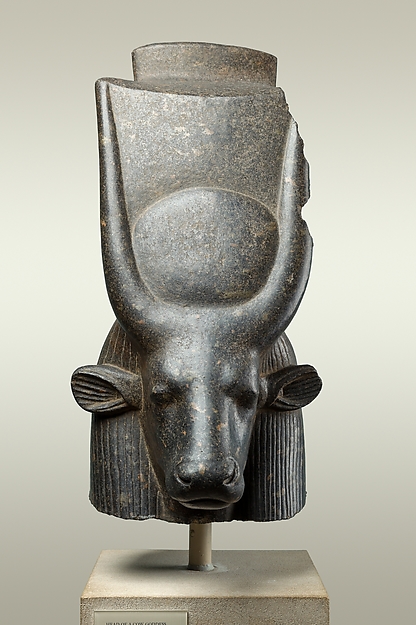 One of the most complex goddesses in ancient Egypt was the goddess Hathor. Hathor was the mother of all gods and goddesses in ancient Egypt. “With her name meaning “the house above”, it is little surprise that Hathor was an Egyptian celestial Goddess, the Mistress of the Heavens.” (Billinghurst 1) Hathor wasn’t only seen as a mistress of the Heavens, she also was the “Egyptian patroness of lovers, the protector of women and children, and beloved of both the living and the dead.” (Billinghurst 1) Hathor was so important to the Egyptians that she adapted many different roles but she really stood out because of her influence in both the living and the death of Egyptians. Goddess Hathor was represented as cow because she is seen as giving sustenance to her people, or a beautiful woman with the horns of a cow on her head. She was very popular with the old kingdom and she represents Upper Egypt.

Hathor worshipers originated very early on (3rd millennium BCE). “In ancient Egyptian religion, goddess of the sky, of women, and of fertility and love.” (Encyclopaedia Britannica) Although she had a strong role in the living she played a large role in death as well. Hathor was seen as welcoming the dead to the other side and she would keep them safe during their journey. Hathor also has a holy day on September 17th when mirrors are place around her temple because mirrors where sacred to her and she is the goddess of beauty afterall. “The festival of the Valley” is also associated with Hathor, which took place in Thebes. “During this festival the kas (or spirit) of the dead were revived. A lightened torch was extinguished in a bowl of cow’s milk, symbolizing rebirth and the successful return of the dead to Hathor.”(Billinghurst 3) Hathor played many different roles and was worshiped for many different reasons and in many different ways.

The image above is “The Head of a Cow Goddess (Hathor)”. This image is a picture of a sculpture made out of diorite that represents the goddess Hathor when she is represented as a cow. We not only see a beautiful face of a cow but the cow has some human assets to go along with it. The cow has a full head of hair like a human women would and sitting atop of the cows head is a crown showing its importance. This is not a particular large statue, which implies that this was something that people could pray in front of in a temple or it could be moved around to always have a part of the goddess with them. This statue was most likely made to honor the Goddess Hathor and was made at this size so that people could move it around with them if need be, to show Hathors importance in many different aspects of life.