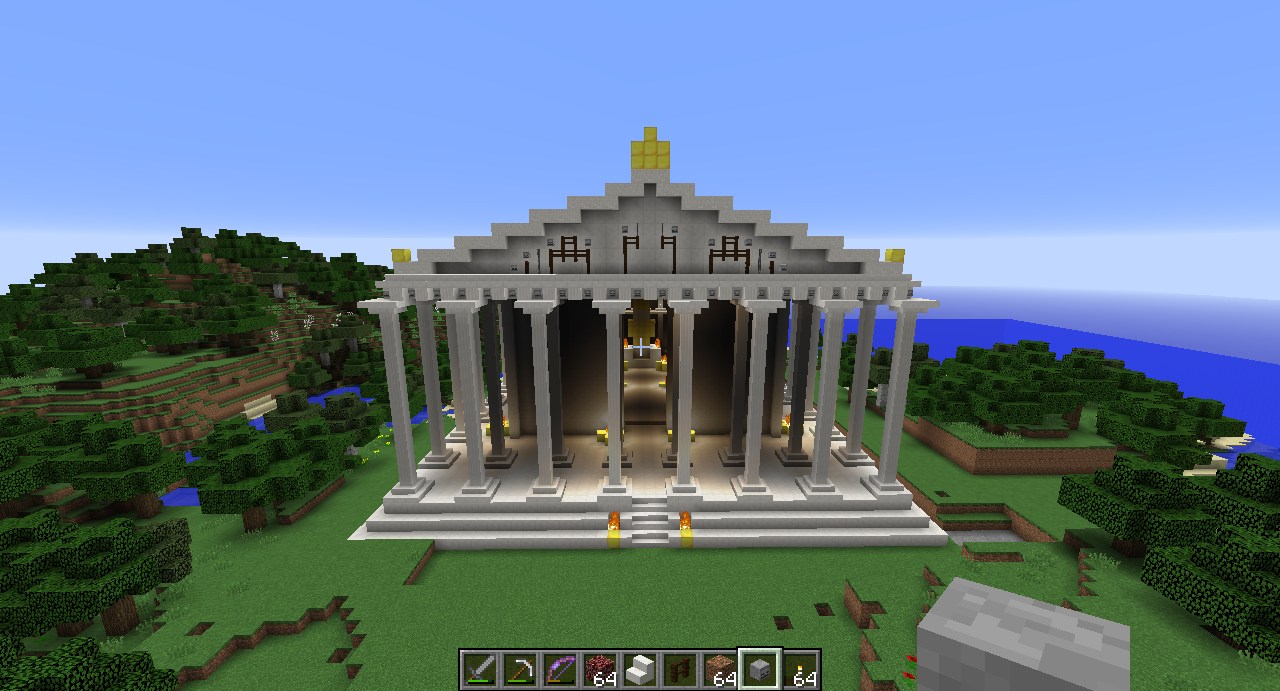 The Greek Parthenon can be found in ruins at the acropolis in Athens. Originally designed by architects Iktinos and Kallikrates, the temple became the best renowned structure of Ancient Greece. In the middle to late 5th century BCE, this massive structure was dedicated to the gods, specifically to the goddess Athena whom acted as the patron deity of Athens. The original structure is made out of limestone and marble (as well as bronze and gold in some areas), which was continually looted over centuries. This was nicely outlined in Evan Hadingham’s “Unlocking Mysteries of the Parthenon”. As a result, there is very little left remaining of this structure due mainly to the erosion of the materials over time, but mistreatment of the space and looting as well. Over the years several reconstructions were created to portray the magnitude and structural genius that defines the Parthenon as well as the core ideals of Greek culture. There are several different ways that reconstructions have been created including the replica in Nashville, Tennessee as well as smaller models approximately the size of a dollhouse. Through the advancements in technology as well as some research into the considerable amount of architectural elements, this reconstruction of the Parthenon was created using the game Minecraft. Because the current ruined state of the structure, people are unable to experience the magnitude of the structure as well as the ethereal qualities of the Parthenon, which were carefully architected by interacting with its environment and displaying its culture.

Using Minecraft as a tool to reconstruct this temple has its benefits because there are night and day settings that cast shadows at realistic angles. This is optimal for this reconstruction because one of the most remarkable aspects of the Parthenon is the contrasting light and dark spaces within the different parts and rooms of the building. For the vast majority of the reconstruction, I used the white quartz blocks and its several forms. Most of the floor as well as the roof is made from the chiseled white quartz blocks, the columns are made from the column white quartz blocks, and the capitals for the columns as well as the remainder of the structure is made out of the original white quartz. The white quartz looks the most similar to marble in the server and offers the use of the columns as well (columns cannot be created using other materials). In order to maintain the lighting on the interior as well as around the sides of the building, golden braziers were created with ignited netherrack in the center. There were additional gold accents that were used on the roof as well as adorning the colossal statue of the goddess Athena in the cella.

In order to begin the reconstruction, researching plans and photos of the Parthenon was essential. The most useful of these were found within James Fergusson’s book, The Parthenon. Within this text a plan was made available as well as useful information regarding the columnar order as well as the proper labeling for the various rooms and sections of the ancient Greek structure. It is also fortunate that there is a decent amount of foundation that remains at the acropolis and has been photographed millions of times. The photographs of the Parthenon from all different angles on the Internet were also very useful in regard to estimating the scale of the building and how it would most accurately and perfectly be reconstructed within the game server. Once an area within the game realm was cleared out into a flat area, the plan that was included in Fergusson’s book was utilized.

The most important aspect of the Parthenon is the aspect of lighting. There is a stark contrast between light and dark within the structure due to the outer columns within the colonnade as well as the wall that sections off the inner portions of the temple. This is also mainly due to the Eastward facing entrance of the temple which was mentioned in Lena Lambrinou’s “The Parthenon Through Time”. During the morning daylight hours, the sun would shine through the columns and within the cella and illuminate the interior of the structure. This aspect of lighting is included within the Minecraft reconstruction because the temple was created with an Eastward facing entrance as well. The columns were all put into place precisely as the plan instructs. This accuracy allows for optimal illumination of the pronaos and the cella exactly as the architects would have originally intended. Additionally, Fergusson remarks upon that of the Doric order columns. Creating stairs out of the white quartz blocks and placing them upside-down on the ceiling and normally on the ground surrounding each column block could recreate the Doric order column style.

Another aspect of the Parthenon that becomes quintessential to Hellenistic architecture of temples is the illusion of a wall made out of columns. In reality, if one desired to visit the Parthenon at the Athenian acropolis, they would come at the structure from an angle. This angle offers the illusion that the left side of the structure, completely made from columns, is really a wall. The concept of creating walls without actually making solid walls is a trend that continues for centuries. For comparison to the real structure, the angular wall illusion is still functional with the Minecraft reconstruction. This peristyle structure is not only ideal to withstand the weight of the roof, but allows for the light and dark contrast to persist throughout the building.

The colossal statue of patron deity, Athena, proudly stood within the cella. Bruce S. Thornton remarks on the glorious statue and refers to her golden armor. Though there are certain limitations within Minecraft (such as being able to create a realistic statue on a smaller scale), a generalized Minecraft version of Athena was created in the statue’s place. The gold blocks were placed to display Athena’s armor in this section. It had already been established by the plan included in Fergusson’s book that the statue was raised above the ground level of the structure. Outside of the cella, but within the naos, would have contained the infamous Elgin Marbles. These statues were, of course, taken from their home at the acropolis and taken to museums that maintained what remained of the pieces. Thornton remarks on the statues and particularly on how much the statue of Athena cost, as well as the rest of the construction of the acropolis during ancient times.

The last section of the Parthenon is the opisthodomos. This would have been restricted to very few people. The only entrance to this area is around the back. The room is small and contains four Doric order columns. This is where the treasure of Athens was said to be kept. People would give Athena large offerings of gold and precious belongings that were held in the opisthodomos. According to Thornton, this area acted as Athens’ treasury of sorts. The security of the room is heightened because there is only one entrance; it is small, dark and not especially easy to get to.

Lastly, the pediment of the Parthenon was a main point of reconstruction. Because of the scaling used, a simplified scene was created to fill the space. The East pediment, of the original structure, was a narrative representing the birth of Athena. The West pediment portrayed the competition between Athena and Poseidon that determined which deity would earn the position of divine patron of Athens. The pediments were not the only details included in constructing the upper parts of the building: the friezes and metopes were included as well which were analyzed in Toshihiro Osada’s article, Also 10 tribal units: the grouping of cavalry on the Parthenon north frieze.

Reconstructions of ancient Greece’s Parthenon are essential to understanding the experience of the structure. Because it was located at the highest point in the city and because the structure is so grandiose, the temple could be nothing less than a product of and related to the gods. The structure and the devotional statue located within offer a larger-than-life experience to the viewer. It is a marvel to experience the magnitude of the building and its contents while also experiencing the contrasting light and dark spaces within and how the building interacts with its environment. The Parthenon has been, and will continue to be, one of the most influential structures in history. Even in ruins, the structure inspires awe to millions of people and provokes curiosity of ancient Greek culture.

Fergusson, James. 1883. “The Parthenon: an essay on the mode by which light was introduced into Greek and Roman temples.” HathiTrust (accessed April 18, 2015).