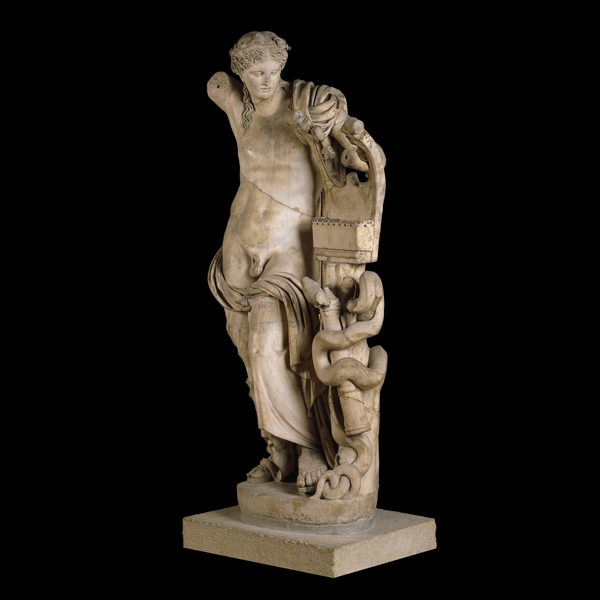 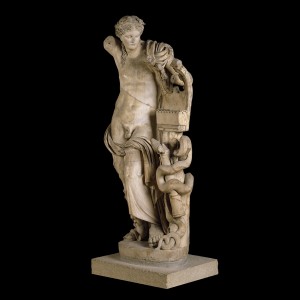 Apollo, a deity of many functions and meanings, after Zeus perhaps is the most influential of all the Greek gods. He was the son of Zeus and Leto, twin brother of Artemis. Apollo, one of the great gods, is represented in some degree dependence on Zeus, who is the source of the powers. The powers of Apollo are of different kinds, but all are connected with one another.

Apollo is the god who punishes and destroys the wicked and overbearing when he wearing bow and arrows. All sudden deaths of men were believed to be the effect of the arrows of Apollo. Also, Hyginus relates, that “four days after his birth, Apollo killed the dragon Python at the mount Parnassus.”

The Python of Delphi was a creature with the body of a snake. This creature dwelled on Mountain Parnassus, in central Greece. Wherever it went, it diffused an obnoxious smell and spread mischief and death.
Python was once sent out by Hera, the wife of Zeus, in order to chase the pregnant Leto, a lover of Zeus so that she couldn’t settle anywhere to give birth.  By the time Apollo, the son of Leto, was only four days old, he was already a strong boy. A silver bow with golden arrows, given to him by the blacksmith Hephaestus, made the young god decide to kill Python and take revenge.

The death of the Python filled Apollo with joy, so he happily took his lyre and started playing a song of victory, giving joy to people all around. This was the moment where Apollo became the god of the Music. Right after he finished his song, Apollo took the creature and buried it under the slopes of Mount Parnassus. On its surface, he built the oracle of Delphi, which is also known as the “Pythia”.

However, because the blood of Python,  Apollo had committed a crime and, according to the laws of Mount Olympus, he needed to be purified. Therefore, Zeus ordered from Apollo to institute the Pythian Games at Delphi so that athletic and musical competitions could be hosted. Apollo followed the order and he even took part in the games himself. From then on, the Pythian Games were held every four years in Apollo’s honor.

Apollo is the god who delights in the foundation of towns and the establishment of civil constitutions. He helped the construction of Troy. A town or a colony was never founded by the Greeks without consulting an oracle of Apollo, so that in every case he become, as it were, their spiritual leader. In Egypt, he was made to form a part of their astronomical system, which was afterwards introduced into Greece, where it became the prevalent opinion of the learned.

Apollo also is the god of prophecy. He had the power of communicating the gift of prophecy both to gods and men. As the god of song and music, He delighted the immortal gods with his play on the phorminx during their repast. Apollo is ascribed as the invention of the flute and lyre.

“The first time we hear of the worship of Apollo at Rome is in the year B. C. 430, when, for the purpose of averting a plague, a temple was raised to him, and soon after dedicated by the consul, C. Julius. A second temple was built for him in the year B. C. 350. During the second Punic war, in B. C. 212, the Ludi Apollinares was instituted in honor of Apollo. ””The worship of this divinity, however, did not form a very prominent part in the religion of the Romans till the time of Augustus, who, after the battle of Actium, not only dedicated to him a portion of the spoils, but built or embellished his temple at Actium, and founded a new one at Rome on the Palatine, and instituted quinquennial games at Actium”.

Apollo, the national divinity of the Greeks, was of course represented in all the ways which  arts were capable of. As the ideas of the god became gradually and more and more fully developed, his representations in works of art rose from a rude wooden image to the perfect ideal of youthful manliness. The most beautiful and celebrated among the extant representations of Apollo are the colossal marble statue of Appollo in London, which was discovered broken into 121 pieces, laying near the large pedestal on which it had originally stood at Cyrene in modern Libya. This image of Apollo shows him holding a lyre, and so emphasizes his role as god of music. He is naked apart from the precariously draped himation or cloak around his hips, and has an almost feminine quality that reflects the influence of Hellenistic statuary of the second century BC The limbs are well proportioned and harmonious, the muscles are not worked out too strongly, and at the hips the figure is rather thin in proportion to the breast.