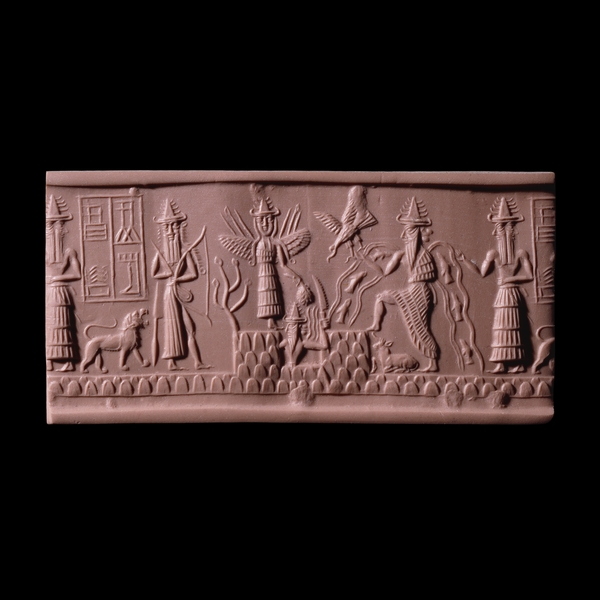 Enki, or Ea (Akkadian), is the Mesopotamia god of fresh waters known as apsu. He is the god of wisdom, farming, building, magic and crafts. Enki is depicted as a bearded man surrounded by flowing water (Foster, 151). Two symbols associated with Enki are the goatfish and a scepter with a ram’s head. Enki is one of the three most powerful gods in the Mesopotamian pantheon, including Anu and Enlil.

Sumerian texts about Enki often include sexual portrayals of his virile masculinity. There is a metaphorical link between the life-giving properties of Enki’s semen and the fresh water from the apsu (Horry). Enki is associated with the city of Eridu, and his temple was called E-abzu, meaning house of the apsu (foster, 643-644). Among Enki’s various roles in Mesopotamian society, he was in charge of making the lands fertile and civilizing it’s cities. The text Enki and Ninhursanga describes Enki’s role in transforming the land around the marshes of Tilum into fertile ground using water from the apsu (Horry). The Sumerian myth of Inanna and Enki tells about the rules of the universe, called the ‘me’. In the beginning, Enki controls the me. Inanna gets Enki drunk and she tricks him into giving her the me. When Enki realizes he has given Inanna the me, he tries to recover them. Inanna takes the me back to Uruk and Enki can’t get them back. The story of Inanna and Enki is believed to be about a treaty between the cities of Uruk and Eridu (Horry).

Enki can be seen on the Greenstone seal of Adda. The seal of Adda is an Akkadian seal dating back to 2300-2200 BCE (Reade). The cuneiform inscription identifies the owner of the seal as the scribe Adda. The figures on the seal can be identified as Enki, Usimu, Shamash and Inanna. The figure armed with a bow and quiver has not been identified with certainty, but may represent a hunting god like Nusku (Collon). The seal represents the gods’ roles in everyday Mesopotamian life. Enki is represented with streams of water and fish flowing from his shoulders. He is depicted this way because he is the god of water, fertility and wisdom. Behind Enki is Usimu, Enki’s two-faced minister. In the middle of the seal is the sun god, Shamash. Shamash is shown with rays of light rising from his shoulders. He also has a sword that he is using to cut his way through the mountains so he may rise at dawn (Reade). The winged goddess to the left is Inanna. She is shown with weapons rising from her shoulders and a handful of dates. Inanna is represented this way because she is the goddess of war, fertility, wisdom and love.

There are many different gods that represent a variety of things in ancient Mesopotamian culture. The people of these ancient societies used the gods to explain how and why all different aspects of life exist. The seal of Adda shows Enki, Shamash and Inanna doing their duties as gods and goddesses. Enki is shown giving life to the earth with water from the apsu. Through this seal, the people of this culture could better understand the gods and the roles they played on earth.