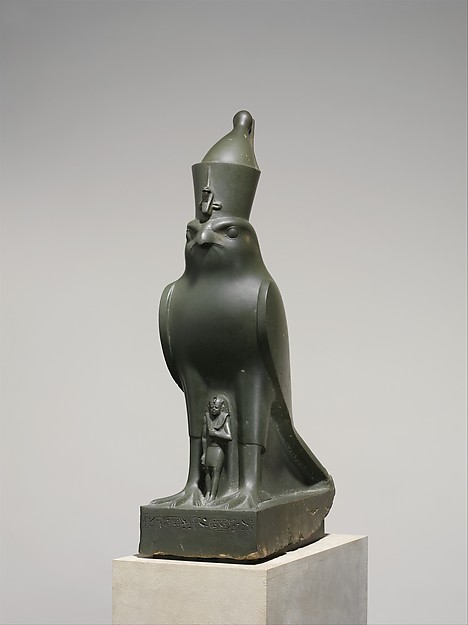 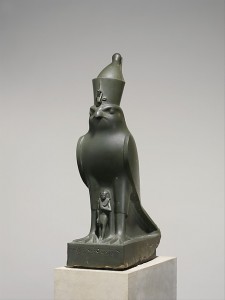 Horus is one of the most powerful of the many ancient Egyptian gods and goddesses and is often considered the ancient Egyptian patron deity. He is widely regarded as the son of Isis and Osiris, although there are some differences in his origin story depending on which part of Egypt you lived in. He is at constant battle with his uncle Seth, who is the god of chaos. Eventually Horus defeats Seth. This triumph is said to be symbolic of the unification of Upper and Lower Egypt.  Horus often takes the form of a man with the head of a falcon and is the god of kingship, the sun, and the sky. His right eye was said to be the sun, while his right eye was the moon. The Wedjat, or the Eye of Horus, is an ancient symbol that was sacred to the Egyptians, representing the royal power and protection of Horus and is seen in many works of ancient Egyptian art. Pharaohs were often considered the living manifestation of the god Horus and often adopted an additional name that identified the pharaoh with the god of kings. This name was usually the most important of the pharaoh’s many names. Horus is also often seen hovering over the head of kings in ancient art, a symbol representing that the king is being protected and watched over by god (Encyclopedia Britannica). Throughout history, there have been several cults dedicated to the worship of the Horus.

In this statue, Horus takes the form of a full falcon rather than the half-man, half-falcon representation often associated with him. He is wearing the double crown, symbolic of the unification of both Upper and Lower Egypt. Standing below the god is the pharaoh Nectanebo II, who ruled Egypt between 360-343 BCE. Horus’ positioning over the pharaoh is symbolic of the god’s protection over Nectanebo II. Nectanebo II was an avid follower of Horus, evidenced by the fact that he was the focus of a cult that was dedicated to the god. The Metropolitan Museum of art has hypothesized that this statue might be read as “a rebus (a combination of images that combine to represent a word) of Nectanebo’s Egyptian name, Nakhthorheb: nakht, the sword held in the king’s left hand; Hor, the falcon; and heb, the festival sign in the king’s right hand. The last sign probably refers to the city of Hebyt, which was the site of the great temple constructed by Nectanebo II for Isis, mother of Horus (The Metropolitan Museum of Art).”