Around 575 BC, King Nebuchadnezzar II of Babylon constructed the eighth gate to the ancient city, the Ishtar Gate. Ancient Babylon was enclosed by tall walls that measured over forty one miles in length and today it is still debated how tall the walls would have been. It has been estimated that the walls stood 75 feet tall, and other have even described the walls as being 300 feet tall (Walls 2012). Because the walls are no longer standing it is of no real knowledge that we would be able to decipher just how tall the walls of Babylon stood. However, it is agreed that there were two walls surrounding the ancient city, with the Greek historian Herodotus claiming that a four-horse chariot could move between the two (Walls 2012).

The Ishtar Gate was built in dedication to the Babylonian goddess Ishtar and stood approximately 38 feet tall (Garcia, 2013).  It was constructed of mud bricks that were created from the clay taken from the river valley. Babylon was surrounded on one side by the Euphrates river, and as a result, Babylonians constructed most of their architecture with clay bricks (Harris 2012). The Ishtar Gate was constructed on the side with the river and was accessed by the Processional Way. The Processional Way crossed over the Euphrates River and was used in religious ceremonies. Each new year, those participating in the religious ceremony would carry statues that represented the gods over the Processional Way. This ceremony honored Marduk, the patron god of Babylon (Damon, 1993). The gate displays reliefs of lions, dragons, and bulls, each representing different gods and formed from brick. The lion represented the goddess Ishtar and could be found lining the walls of the Processional Way (Garcia, 2013).

Today there is a portion of the gate that is standing in the Pergamon Museum in Berlin, Germany (King, 2008). Between 1928 and 1930, a representational reconstruction was built and transferred to the Pergamon Museum. It was created using the excavated remains of the gate. However, because of the size of the museum, they were not able to create an exact replica and the gate standing in the museum is smaller than the actual gate would have been. They only have the first gate on display, with the larger second piece in storage because of size restrictions.

During my reconstruction of the Ishtar Gate, I used artistic renderings and the Pergamon reconstruction for inspiration. I began by constructing the front half of the gate with two large pillars and the gate archway. From my readings, I had determined that the second part of the gate would have been similar to the first, except it would have been larger. I constructed my gate using playing cards because they would provide a sturdy and bendable material. They also had an interesting, blue design that I believed would look nice. Because the material I used was already decorated and on a small scale, I did not show the reliefs of the dragons, lions, and bulls. If the reconstruction were done on a larger scale, it would be easier to show the animal reliefs. I cut, folded, and glued the cards into the shape of the reconstruction found at the Pergamon museum. After achieving the desired look I constructed the second part of the gate that would have been found on the inner wall surrounding the city. I created larger columns for the second part and attached the two pieces together. After reaching completion of the large pieces of the gate I was able to measure and cut sections of brown paper for the roof of the gate and large columns. After finishing my gate I attached it to the desired base and created a path to the gate. I created a path to represent the Processional Way over the Euphrates River. I wanted the gate to be the main focus and effort of my reconstruction so I did not create an overly designed representation of the Processional Way. I also used tulle to represent the Euphrates River, which the Processional Way crossed over.

Reconstructions are important in art and history because it gives us a glimpse of what an object would have looked like when it was created. When an object is discovered or located it is not usually whole and complete. Reconstructing an object allows further study of a culture and society when we might not get a complete understanding of otherwise. The Ishtar Gate would never have been as appreciated or studied as it is today had there not been a reconstruction. It is one thing for an artist to draw what an object might have looked like, but when an object such as the gate is reconstructed, it allows people to get a better understanding of the size, shape, look, and importance of the object. As I was reconstructing the gate, I learned more about it and now have a better understanding of the city of Babylon, the gate, and the religious importance of the gate and religious ceremonies. 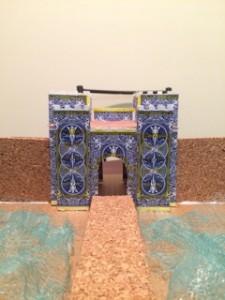