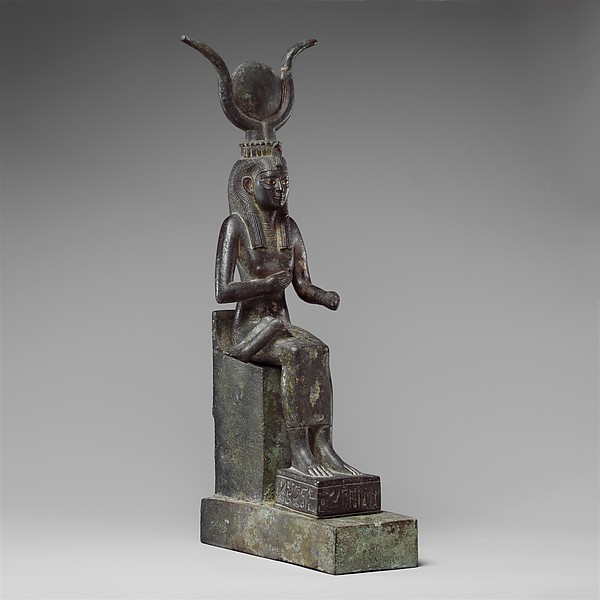 This figure of Isis, dating from 611 to 594 BCE, depicts the Egyptian goddess seated as she nurses her child, the god Horus—of whose likeness only the lower legs remain. An unknown sculptor cast this statuette of “exceptionally fine countenance,” measuring fifteen and a half inches tall by four and seven-eighths inches wide, in bronze, gilded her likeness in silver, then placed her upon a separate leaded bronze throne (Metropolitan). Revealing the importance of Isis to ancient Egyptian society, the base beneath her feet implores that the she grant to “life prosperity and health to the ‘Chamberlain of the Divine Consort, Hor, son of the Prince, Count, Overseer of Upper Egypt, Overseer of the Great House of the Divine Consort, Padihorresnet’” (Metropolitan). At the time of this statuette’s creation, Padihoressnet was one was amongst the most powerful men in Thebes.
As one of the most essential goddesses of ancient Egypt, Isis—also referred to Aset or Eset—first grew to prominence in the dynastic age. The priests of Heliopolis, followers of the sun god Re, first developed the myth of Isis. In this myth, Isis, daughter of the earth god Geb and sky goddess Net and sister to the deities Osiris and Seth, marries her brother Osiris, King of Egypt. Throughout her reign as Queen, domestic harmony prevails. Isis not only supports her husband, but she also teaches the women of Egypt to weave, bake, and brew beer. An insatiably jealous Seth traps Osiris in a decorated wooden chest, then pitches this effective coffin into the depths of the Nile. With great effort, Isis discovers her husband, still trapped in the chest. Upon Osiris’s return to Egypt, an infuriated Seth hacks Osiris into pieces which he then scatters far and wide. To gather theses pieces, Osiris, with the help of her sister Nephthys, transforms into a bird. Upon reuniting these pieces, Isis realizes that an essential piece of her husband’s anatomy remains missing: his penis. Invoking magic, Isis makes Osiris whole once more. The couple soon bear a son, Horus.
Simultaneously a mourner, a magical healer, and a mother; the roles of Isis were multiple and complex. As a principle deity in the rites of the dead, she possessed the ability to cure the sick and bring the dead back to life. A mother herself to Horus, Isis served as a role model to all Egyptian women. Perhaps not surprisingly, Isis, too, held strong links to Egyptian kingship—as evidenced in the statuette above.
In this particular depiction of Isis, dedicated to Hor—son of Padihoressnet, her “slightly slanted eyes and upturned lips” align with the characteristics of art of the Twenty-sixth dynasty (Metropolitan). Likewise, her extended brow and eye-lines reveal this woman as a divine goddess rather than mere mortal. The large, elaborate horned headdress that she wears, formerly of the maternal goddess Hathor, as well as her vulture cap emphasize her role as a mother and maternal goddess. Elaborately and expensively decorated, this statuette features inlaid bands of gilded silver in the recesses between the horns and sun disks on both sides of her crown. Similarly, the whites of Isis’s eyes are rendered in gilded silver or electrum, though much of the gold surface has been abraded. Therefore, one may rightly assume that for Hor, son of Padihorresnet, few expenses were spared in depicting this divine, magical, mother goddess and friend of Kings. Thus, in this depiction of Isis, seated as she nurses her son, the anonymous sculptor emphasizes both her similarity to all mothers as well as her divinity and richness—separating maternal goddess from mortal mother.