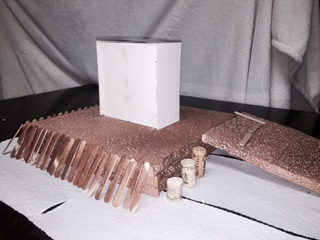 The White Temple is one of the few ziggurat structures that left enough remains to give a hint to what it could have looked like when it was first built. This famous temple was built for the Mesopotamian god, Anu, around mid 3000 BCE (Gates). These ziggurats were unique because of the trend of this period to place a deity as the owner of a city (Mark). Therefore, the temple of these gods would be the center of town, the largest structure, and could have been seen from beyond the city’s fortress to foreigners (Ruins). Reconstruction of the White Temple exhibits all of these Mesopotamia characteristics, which helps us better understand the importance of religion to this society.

For this reconstruction, the rebuilding of what the White Temple should have resembled could better help with the understanding of the Sumerian religion. Ziggurats were made of mud-brick during this time and often would be high enough to be the tallest structure in the city. The Anu Ziggurat (the base of the White Temple) is a polygonal shape, which is different because of the complicated staircase that was created to reach the terrace around the White Temple (Uruk). The staircase and walkway were built in a way so that the entire city would have been able to see the people walking up to the terrace. This is important because it would have been imperative to the city people to broadcast to the town that they were visiting Anu, the sky god. However, only a few were allowed into the White Temple to be a part of the sacrifices and religious ceremonies, most likely the priest and important leaders (Ruins). The White Temple stood forty feet above the city level oriented by the corners to the cardinal points of a compass (Gardner 34). It would have been made of mud-brick as well, but since this is not attractive to the eye, the temple was covered in white plaster. The interior of the temple would have had a central hall leading to an altar (Gardner 33). These temples were often seen as the gateway between the gods and earth, so Anu would have descended to the altar in this divine hall. These are the key elements that make up the layout of the reconstruction of the White Temple. Though we cannot be certain this is the exact layout of the White Temple, it does fit in with the ziggurats of Mesopotamia. There were enough remains to also suggest to this kind of setup, as well as a small temple model that was found in the White Temple during excavation (Uruk). 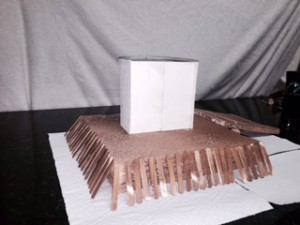 describe so much about the culture of this society in relation to religion. Religion was the most important aspect of life for Sumerians, so it makes sense that the temple to their deity would have been the largest structure. Also, mountains and high structures such as this temple would have been seen as a sacred high place between heaven and earth. But, not only were there religious ceremonies held in the temple, but also this would have been where the leaders met for executive and economic meetings (Gardner 33). The terrace had a surface area of about 45 x 50 m, which alludes to the encouragement for the townspeople to come up to this area and praise Anu (Uruk). Even though most people did not go into the actual temple, they were definitely encouraged to visit the temple and observe rituals. The layout of the temple suggest to many offerings to the altar where Anu would have descended down to before the priest (Gates). The layout of the White Temple exhibits that there was a necessity for the people to be seen by the city and by the gods visiting their deity. The governmental backbone was even focused around religion, and it is clear from the layout of the White temple that administrative meetings would have also been held in this sacred temple. The height and large-scale of the White temple being above the fortress wall is the prime explanation to the importance of religion. The Sumerians would have wanted anyone passing outside their city to see the White Temple and know this town belonged to the deity, Anu.

Reconstructions like this can help historians today better understand the Sumerians based on these specific structures. Each choice made in building the White Temple suggested to a religious motive driving that architectural decision. By looking at other Mesopotamian structures and the remains, we can come close to an accurate setup to help us understand these decisions. The White Temple is a perfect example of rebuilding a structure from history, so that we can learn more about the history from that time period.

2. Gates, Charles, and Neslihan Yılmaz. Ancient Cities: The Archaeology of Urban Life in the Ancient Near East and Egypt, Greece, and Rome. Abingdon, Oxon: Routledge, 2011. Print.