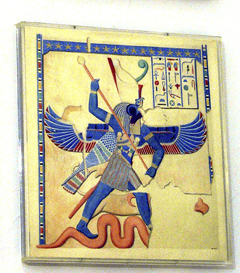 Seth: The God of Chaos

Seth, also known as Set, was a God worshiped by many and despised by even more during the ancient Egyptian period. Some pharaohs, like the Ramesside pharaohs and King Paribsen of the second dynasty, worshipped him and named themselves after him instead of his more commonly known relative Horus, the son of his estranged brother Osiris. He was the fourth principle god of the cosmos, right after Amon, Re and Ptah. Others in the later New Kingdom, when Seth’s brother Osiris became the more prominent god to be worshipped, considered him to be the ancient Egyptian equivalent to the devil. He first became prominent in the city of Nubt, located at near present day Tukh west of the Nile River. He is described as having a “canine body, slanting eyes, square-tipped ears, tuffed (in later representations, forked) tail, and a long, curved, pointed snout (Britannica, 1).”

The family tree of the Gods in ancient Egypt is a complicated one. Many had multiple affairs and married their own siblings. Seth was the second son of Nut, the goddess of the sky and the protector of the earth, and Geb, another god of the sky. He was an accident child of the gods. He painfully ripped himself apart from his mother and was born to watch his brother seize control of all of Egypt. His older brother was Osiris, making him the Egyptian world’s “first younger brother (Tyldesley, 32).” In the article “Seth: The Complex God,” Dr. Joyce Tyldesley describes Seth as “the jealous brother who killed his brother Osiris to take his place on the throne (Tyldesley, 32).” Seth’s sleighing of his brother was a widespread and very important tale. There are many different theories as to why he did it—some believe he was jealous of his brother for being the ruler of all Egypt; others think he began to grow jealous of his brother’s marriage to his beautiful wife and sister Isis. He violently killed his older brother by chopping him up in pieces and sending him down the Nile. Isis eventually found all of his pieces and resurrected his body.

Seth counterbalanced the order that was so important in the ordered Egyptian world and brought with him chaos—he was the god in control of the desert and weather storms and all things natural and violent. The image shown is of Seth slaying a serpent painted in tempera on paper. It comes from the reign of Darius I, a member of the twenty seventh dynasty during a time when Seth was still worshipped heavily. The image was found in the Temple of Amun at Hibis. He is shown in his human form rather than his violent canine form, a gesture that suggests admiration rather than dislike for him during this time. “He alone had the strength to fight off the malevolent serpent Apophis who threatened the son each night (Tyldesley, 33).” This image relates to the famous altercation between Seth and his Nephew Horus, known as Contendings of Horus and Seth. This is a historical story in which Seth is in power and doesn’t want to give up his throne to his very young nephew. He was much older, much wiser (or so he believed), and much stronger. Many of the other gods sided with Seth, believing Seth’s age and wisdom made him more deserving of the throne than his young and naïve nephew. The gods then ask the resurrected Osiris to decide which man should rule, and Osiris unsurprisingly chooses his son Horus. Seth is then sent to the sky and is assigned the duty of forever fighting off the serpent Apophis, as shown in the image provided (Tyldesley 33).