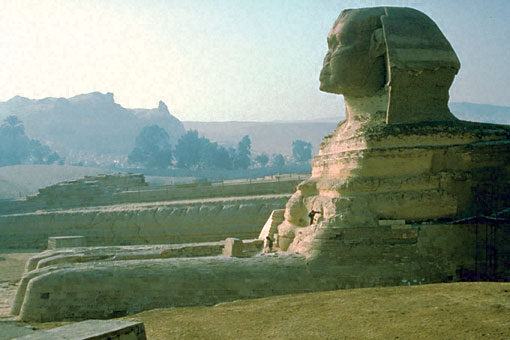 The Sphinx was a mythological creature, a symbol of power and protection in Ancient Egyptian and Greek cultures, with the body of a lion and the head of a human. In Greek mythology the sphinxes appearance was much different – they had wings and “…wore a flat cap with a flamelike projection on top” (Britannica). The true meaning behind the Sphinx in every culture seems to be unknown, but the presence of the sphinxes was so prevalent that they definitely must have born some great significance to both the Egyptians and the Greeks.

The Great Sphinx at Giza was built somewhere between 2520 and 2494 BCE during the 4th Dynasty on the west bank of the Nile, part of the necropolis of ancient Memphis (Haughton). At 73.5m in length, and in parts 20m in height, the Great Sphinx is credited for being one of the largest surviving sculptures and sphinxes in the world. The statue is constructed out of limestone. The royal head symbolizes the enormous power of the pharaoh or ruler; a form of propaganda (British Museum), and the extensions on the side of the statue depicts the royal head cloth. During the 4th Dynasty, Khafre, also known as Chephren, was reigning, and is believed to be the one to whom the Great Sphinx was attributed (British Museum). Egyptian rulers later worshiped the statue as Horus, the sun god. During the time of the 4th dynasty, Egypt was prosperous and stable which is what allowed the many years and countless resources necessary for the building of the great pyramids and sphinxes as monuments to the pharaohs.

The Great Sphinx lies in front of the Giza Plateau Complex, the Great Pyramid of Khafre. The guardian of the pyramids and a symbol of Khafre’s power over Egypt, the figure is, no doubt imposing.

The Great Sphinx has been completely submerged in sand for much of its history and dug up many times. The years of submersion in sand is believed to be what has kept it in tact for this long without completely deteriorating. Today, the Great Sphinx is suffering from a great deal of deterioration due to weather conditions and pollution in the region. The nose and beard are missing. You can find a fragment of the beard of the Great Sphinx in the British Museum. Giovanni Battista Caviglia discovered the fragment in 1817.