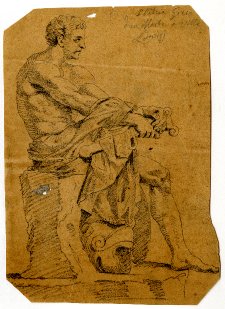 Ares, son of Zeus and Hera, is god of warfare. In the Roman pantheon, he is known as Mars. He personifies the brutal, animalistic violence of war. Ares was not a very well liked or widely worshipped god, unlike his Roman counter-part, who was only slightly more liked. He is often portrayed with Fear, Terror, and Discord, represented by his sons, Phobos and Deimos, and his sister, Enyo, respectively. Ares often makes rash and intuitive decisions that often lead him to defeat and humiliation. Unlike Athena, the goddess of strategic warfare, Ares is known for not thinking things through and rushing into battle head-on. He is mostly depicted bearded, young, and dressed for battle. His lack of distinctive features can make him difficult to identify.

Ares has many great adventures in Greek mythology. Some – most notably the Trojan War – end in failure and humiliation, as depicted in Homer’s Iliad. Initially siding his mother and sister, Hera and Athena, to fight with the Greeks, Ares was convinced by his lover, Aphrodite, to back the Trojans instead. This, of course, incurred the fury of Athena and Hera. During the battle, Ares lost his son, Askalaphos, to Deiphobos of Troy. Once Zeus allows the gods to join the battle on whichever side they pleased, Ares finally enters the battlefield and is joined by his Amazon daughter, Penthesileia. However, she is quickly slain by Achilles. When Ares and Athena finally met on the field, Ares is defeated and led away by Aphrodite.

For all his rash violence, nobody can question Ares’ love for his children and his demand for justice. When Poseidon’s son, Halirrhothius, raped Ares’ daughter, Aclippe, Ares sought revenge and killed Halirrhothius. Ares was taken to trial held on the hill Acropolis in Athens. In the end, Ares was acquitted.

Paolo Alessandro Maffei’s drawing of the Ludovisi Ares sculpture shows a seated Ares holding his sword and resting his foot on his helmet. In the original sculpture, it is the figure of Cupid at Ares’ feet, not his helmet. Cupid’s presence indicates that the sculpture could be a romantic gift or some symbolism of softness contrasted with Ares’ harshness. The replacement of Cupid with a helmet completely eradicates the idea of any romance and instead places Ares in his natural combative habitat. Perhaps this is the moment before or after battle, where Ares sits in contemplation.