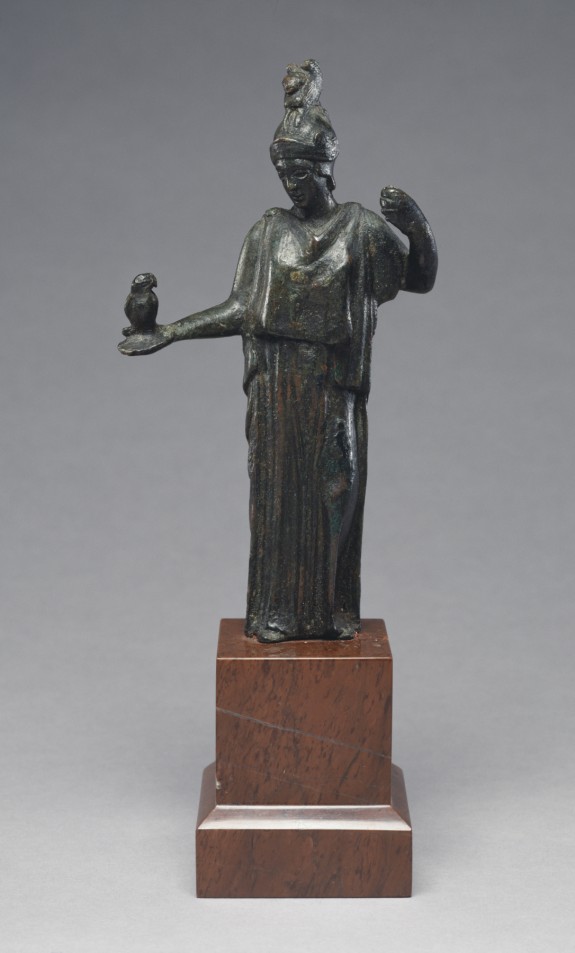 Athena (Minerva to the Romans) was the goddess of reason, wisdom, handicrafts, and war. She was also the guardian of Athens, of which was named after her. She was seen as a fierce, brave warrior, but would only fight in conflicts that would threaten her state, and was said to value peace. She is the daughter of the Greek chief god Zeus, and was said to be his favorite child. In one interpretation of her origin, she sprung to life from Zeus’s forehead, full grown, and without a mother. She was known as the Parthenos (the virgin). She was associated with birds, specifically owls. She is most commonly depicted wearing armor, and carrying a spear and shield matching her roll as a goddess of war, and as a guardian. As Minerva, her roles don’t change much from her Greek incarnation other than taking over the victory aspects of the Greek goddess Nike.

Athena in mythology is noted for inventing many different items that would become essential to the people’s lives. In the fields of agriculture she invented the bridle ,  the rake, and the plow. In transportation, she invented the ship, and the chariot, and in entertainment, she invented the trumpet, and the flute.  Athena is also noted for having a turbulent history with Poseidon, the god of the sea. Both Athena and Poseidon competed to be the patron god of what would be Athens, and Athena won the contest by giving the humans the olive tree. In one story, a beautiful woman named Medusa fell in love with Poseidon, and the two mated in Athena’s temple. This Angered Athena and she placed a curse on Medusa which caused her to turn into a monster so vile that a single glance at her would turn a person to pure stone. In Homer’s The Odyssey, the titular character, Odysseus, angers Poseidon by not crediting him for the siege of Troy, and the end of the Trojan war, and dooms Odysseus to never be able to return to his home in Ithaca. Athena intervenes in Poseidon’s plans, and guides/protects Odysseus from Poseidon on his journey home.

In this statue, Athena is depicted wearing an armored helmet and holding an owl, the emblem of her wisdom, in her right hand. Originally this statue held a spear in her left hand, but has since been lost. The statue’s lack of body armor and shield seems to indicate that this statue may have been created during a time of peace.  Her helmet is adorned with a miniature sphinx, which in addition to fitting her guardian traits, it could possibly be a nod to the mental battle the sphinx engages Oedipus, and the “Riddle of the Sphinx” which would coincide with the wisdom aspects of Athena’s character.