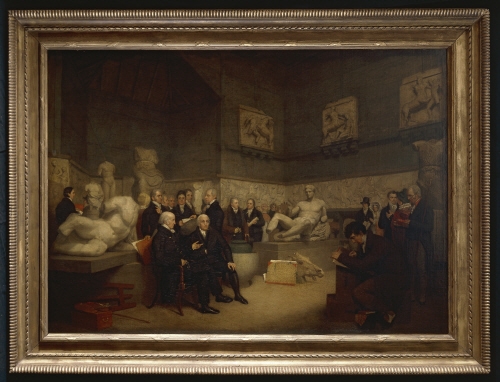 When the Parthenon was constructed in the 5th century BCE, Athens was thriving as a democracy under the rule of Pericles. This temple was built to honor the patron deity of Athens, Athena. This goddess’ attributes of intellect and warrior prowess reflected ideals that the Athenians revered. As a warrior culture with extreme civic pride, Athena’s Parthenon was the focal point of the Acropolis and visible from around the city of Athens. Decorative marble sculpture series adorned the pediments of the sculpture. These marble sculptures depicted scenes from Greek mythology, such as the birth of Athena and Athena’s victory over Poseidon. As a culture that lived by the notion that any non-Greek person was barbaric, the marble statues of the Parthenon stood as reminders to Athena’s people of Greek and Athenian supremacy.

More than two millennia after completion of the Parthenon and the decorative marble statues, Athens was no longer that mighty republic thriving under Pericles but was subjected to Ottoman authority. A British ambassador to the Ottoman Empire, Lord Elgin, was fascinated with the concept of classical Greek history and took particular interest in the Parthenon’s marble statues while visiting the Acropolis. Initially the ambassador only called for sketches to be made of the statues. After concluding that the marbles were suffering in situ, he removed the pedimental sculptures, metopes, and portions of the frieze to return to England. It was later sold to the British Museum of Art where it still resides.

Today much controversy surrounds the ownership ‘Elgin Marbles.’ Both the British and Greeks argue that each have legal and moral claim over the Parliament’s marble adornments. The British defend their ownership of the marbles based on Greece’s lack of an adequate museum and the fact that they paid for the pieces (McGuigan 2). They further bolster their argument claiming that Western culture including Britain is a product of Greek antiquity, thus the Elgin marbles are part of British history as well (The British Museum 2). The Greeks counter this claim of ownership by building a new Acropolis Museum in 2009 while making extra effort not to disturb any ancient cultural sites (McGuigan 1). Furthermore, the Greeks liken the removal of the marbles to the Nazi plundering of art during World War II (Kimmelman 2). Due to their initiative of preservation and the heritage of the objects, I believe the Elgin Marbles ethically and legally belong in the possession of the Greeks.

It is my opinion that the Elgin Marbles are legally and ethically the property of Greece. Because this issue of ownership is extremely controversial and prevalent today, many believe that the case of ownership should be considered in a modern court. It may be difficult for the legality to be settled in court today, but I do not believe that it is impossible or unadvisable. I do not think there should be a statue of limitations on the looting of a cultural treasure. Greece’s former cultural minister, George Voulgarakis, compares Elgin’s taking of the marble statues to the Nazis plundering priceless art during World War II (Kimmelman 2). Still today Nazi looted art is being returned to their legal owners as an act of atonement for those atrocities. A court case regarding the possibility of the Elgin Marble’s return to Greece could be handled similarly to the homecoming of Nazi looted works. I believe that the Greek government has the greater claim to the Marbles for various reasons. Initially I do not believe that Elgin had the legal authority to remove the marble statues from the Parthenon. Additionally, Elgin’s supposed motivation behind removing them, the lack of the ability to conserve the works, is now invalid. A new Acropolis Museum was constructed in 2009 a mere thousand feet away from the Parthenon. The Greeks now have a worthy space that can preserve and display their national monument just steps from its original location. Furthermore, after discovering an ancient settlement on the construction site, the museum’s plan was altered by elevating the structure on columns and utilizing a glass floor to allow for a view of the excavation (McGuigan 1). This new museum and its subsequent alterations demonstrate the Greek government’s desire for maintaining and preserving its culture. Though I believe there is an inherent difference between a moral and legal right to ownership, I personally consider Greece to be both morally and legally the rightful owners of the Elgin Marbles. Morally, the marble statues are a vital part of Athenian culture and should belong to the nationalistic Greeks. Legally, I don’t believe that Lord Elgin had permissible right to remove the statues, thus his selling them to the British Museum of Art was not legally right. When determining which right of ownership is more pressing, Voulgarakis states it best: “The problem is not legal. It’s ethical and cultural…The Acropolis is special” (Kimmelman 2). I believe that modern courts have an obligation to overturn past legal actions if they are contrary to what is correct for modernity. Without progressing from the past, there can be no advancing to the future. The removing of the marble sculptures during an unstable moment in Greece’s history may have appeared benevolent during the early 19th century, but today they should be returned to the civilization that is prepared to care for its cultural treasure. There are guaranteed to be issues arriving from modern courts overturning past legal actions, such as general opposition to the idea and an influx of reconsidered cases, but correcting a previous action for today’s society is too important to be stymied by potential controversy.