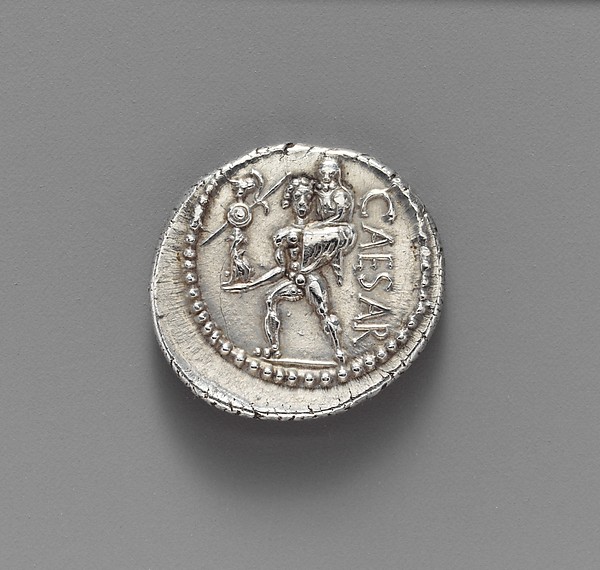 Consider the opening lines of Lucretius’ epic poem of atomic theory and epicurean philosophy :De Rerum Natura (On the Nature of Things):

Mother of the descendants of Aeneas, bringer of pleasure to gods and men, nurturing Venus, beneath the gliding constellations of heaven you fill the bearing sea and the fruitful lands. Through you all living things are conceived and at birth see the light of the sun. Before you, O goddess, the winds withdraw, and at your coming, the clouds in heaven retreat. For you the variegated earth puts forth her lovely flowers, for you the waters of the sea laugh and the sky at peace shines, overspread with light. For you the Zephyr the West Wind, creator of life, is unbarred. You first, O goddess, and your coming do the birds of the air salute, their hearts struck by your power.

Venus plays a larger role in Roman society than her Greek counterpart. According to legend, Venus had lain with a Trojan shepherd by the name of Anchises, and the results of their passions was the Trojan prince Aeneas. Aeneas is the epic hero and the subject of Publius Vergilius Naso (Vergil)’s tale of the Trojan War and its aftermath from a Trojan perspective. According to the Homeric tradition and confirmed in Vergil’s account, the Olympians took sides in the Trojan War. Juno aided the Greeks and Venus the Trojans. According to the Aeneid, Aeneas finally makes his way to Italy and his son Iulus (Ascanius) settles in the area known as Latium. This becomes important to the establishment of the hierarchy of Roman deities and Venus becomes more elevated in power to the Romans. Sometime in the 4th century she is paired off as the prime consort of Mars, the deity who had lain with the Vestal Virgin Rhea Silvia to produce the twins Romulus and Remus. The deities of Love and War- they are held in high regard as the progenitors of the Roman people. The Romans then take this as a sign that they are divinely governed to be a great civilization of people. Venus becomes a highly worshipped deity with several temples being erected to her. She has several epithets attached to her and each of these versions of the deity have slightly different realms of power. She is referred to as Venus Obsequens, Venus Erycina, Venus Victris, Venus Cloacina, Venus Felix, and Venus Genetrix.

Venus Genetrix (Venus the ancestral mother) is incredibly important source of power and imperium for Julius Caesar and his adopted nephew Octavian (Augustus) Caesar. Shortly after military victory and shortly before his death in 44 BC, Julius Caesar begins a building project to create a Forum Iulium and contained within it a temple dedicated to Venus Genetrix since the Julio-Claudian family traces their lineage to Iulus. However to according to the historian Suetonius in his Lives of the Caesars: The Deified Julius Caesar, the temple of Venus Genetrix is what causes the final reason for the conspirators to assassinate Julius Caesar:

However, the extreme and fatal envy he inspired was particularly provoked by the following: when the entire senate came to him, bringing many decrees conferring the highest honours, he received them in front of the temple of Venus Genetrix, without getting up. Some think that he was held back when he tried to rise by Cornelius Balbus. Others believe that he made no attempt to get up and that when Gaius Trebatius actually advised him to rise, he gave him a very hostile look.

What Caesar did to offend the senate was essentially regard himself as a God therefore he was putting himself above the gods and the security and benefit of the Roman Republic. This violates Roman morals particularly pietas. It is ironic that Julius Caesar is seen to violate this moral when he alleged ancestors Aeneas and Iulus are described with the epithet pious on numerous occasions by Vergil in the Aeneid. This silver denarius was minted by Julius Caesar to display his name alongside Aeneas and Anchises on the reverse. On the obverse side of this coin is an Image of Venus but stylistically she is depicted as a high status Roman woman wearing an elaborate braided hairstyle and crown. ( I recommend forumancientcoins.com for an expansive image gallery and more information on Roman coinage).

Furthermore Augustus and other Julio-Claudian emperors would use this connection to assert their power.