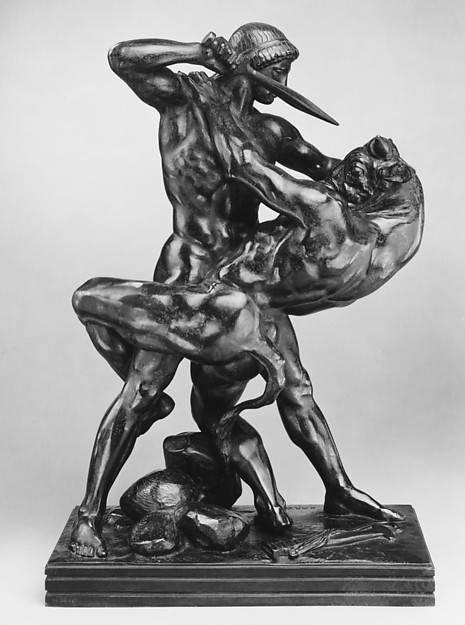 The Minotaur was born from a mortal but he was not a man. The name stems from the Greek name “Minos” and the greek word for “bull.” The story of the Minotaur began with Minos. Minos claimed to have the support of the Gods on his side and believed he could ask them for anything. He prayed to Poseidon to send him a bull that he would sacrifice. Poseidon sent Minos a beautiful white bull and this proved that Minos was meant to be king. However, Minos sacrificed a different bull and kept the beautiful one to himself. This angered the god and as a punishment he caused the King’s wife, Pasiphae, to lust after the bull. Once Pasiphae was cursed, she recruited the help of Daedalus and Icarus to construct for her a wooden cow covered in cowhide to lure the bull to mate. The wooden cow was taken into the pasture with the bull and Pasiphae climbed inside. Pasiphae laid with the bull and became pregnant (Britanniae, 2013).

When the baby was born King Minos learned of his wife’s infidelity. King Minos did not punish Pasiphae but enslaved Daedalus and Icarus for assisting her. The baby had the head and tail of a bull and the body of a man. Pasiphae was able to care for him while he was young, but once the Minotaur grew he could not be sustained on normal food. He began to eat humans and they were his only source of sustenance. Because of the danger that the Minotaur presented, Minos had Daedalus and Icarus build a labyrinth to keep him contained (Britanniae, 2013).

While the Labyrinth was being constructed, King Minos found out that his only son, Androgeos, had been killed. He blamed the Athenians for the death of his son because it was believed that the King of Athens, Aegeus, devised his death. Minos harassed the Athenians until they agreed to sacrifice fourteen youth every nine years, half being men and half being women, to be fed to the Minotaur. Through harsh persuasion of the gods the Athenians were forced to submit to this sacrifice (Britanniae, 2013).

Theseus, the son of King Aegeus, claimed that he could kill the Minotaur and volunteered to be sent to Crete. When Theseus arrived in Crete, King Minos’ daughter Ariadne fell in love with him. She devised a plan to help him kill the Minotaur and escape death. She provided him with a sword and a ball of yarn to be able to find his way back out of the labyrinth. Theseus succeeded in killing the Minotaur and escaping Crete. On his journey back to Athens he absentmindedly forgot to sail the white flag that he had agreed to fly if he was still alive. His father, King Aegaeus, believed him to be dead and threw himself into the sea in despair. When Theseus made it back to Athens he was crowned King (Britanniae, 2013).

The mythological representation of the Minotaur provides us with a tale of monsters, traditional heroism, and kingship. While the Minotaur, King Minos, and Theseus only existed in mythology there has been belief that there is some historical representation in Knossos, an ancient town and site of the Palace of Minos (Vavouranakis, 213). The myth of the Minotaur is not solely about the myth of the beast. The ancient hero, Theseus, is most known for his destruction of the Minotaur. The Minoans were a real civilization and were named after the mythical King Minos. Today we recognize the Minoan civilization as having existed in Crete from around 3100 BC to 1450 BC (Browne, 109). The image presented is of a sculpture titled “Theseus Slaying the Minotaur.” Here Theseus is shown overpowering the Minotaur who is struggling. Many historical art pieces depicting Theseus and the Minotaur are pictured similarly with the Minotaur being defeated. Theseus was known as a traditional heroic figure in mythology. This can show us the cultural representation of a hero during the ancient times. Theseus used his strength to overpower the Minotaur but he also used his intelligence and wits. Representation of a King in this aspect shows that the greeks honored strength, wisdom, and sacrifice. Theseus volunteered to save the lives of those who would be eaten.